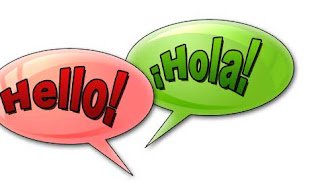 I've been dating my boyfriend for a little over a year and a half, and he hasn't yet been to the US to meet all of my friends and family. My mom and sister came to Brazil and met him, as well as my best friend, but other than that, he's relatively unknown to all that are close to me (aside from the random skype "hellos").
One of the most common questions that people ask me when they find out that I have a Brazilian boyfriend is what language we speak when we are together. (That and "Can you do an impression of his accent?") I never really know how to answer the question because I never pay attention to the language we are speaking.
When we first started dating, he always had to bug me to speak Portuguese. I was living with all Americans and it was difficult for me to make my brain switch into Portuguese mode...you know, when you sort of just spout something out like "fala aí mermão"...and have no idea where you learned it or what it means, but you know it makes sense in context.
However, now that we are both comfortable with each other's languages (more or less) our conversations are all over the place. He will say something in English and I will respond in English with a couple Portuguese words mixed in and he will respond in Portuguese...blah blah blah back and forth with neither of us noticing how weird it must sound to anyone listening in. (I mean, half the time my parents think I'm speaking French when I speak Portuguese...damn Carioca accent!)
I guess what I'm trying to say is that it's exciting. All those years of Portuguese classes, and homework and presentations and tests...and all I had to do was get a boyfriend. I should of known that's where I would find the motivation!
P.S. I have told myself that I am going to write more often (I sort of fell off the bandwagon this month), but I am going to be in Santa Cruz (the one in California, not in Brazil) this weekend to visit a friend (my gatinha's other mommy) and baby gatinha!!!! Yay!
Posted by Nancy at 9:09 PM