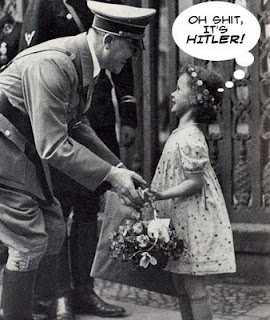 When I first came to Brazil it was through the exchange program at my University. My school here in Brazil (PUC) set me up with a family where I only had to pay $400 reais to rent a room. Unfortunately, there were and still are some MAJOR flaws with the whole home stay situation (such as, absolutely no criteria other than “must have ceiling fan” and no feedback from past students who have stayed there). As luck would have it, I ended up with a bunch of Nazis…literally.

Esther, my home stay mom, was about 50 years old and waited on her husband hand and foot. She forced me to bring bananas to school everyday, which I insisted I didn’t want (don’t get me wrong, I love bananas, but when the bruise to yellow ratio is 9:1, im not down). I hid the bananas in a purse in the corner of my room (the infamous “banana bag”) which later filled with a few million families of fruit flies and banana mush. I never threw it away.

Esther’s husband was about 150 years old and undoubtedly fled Nazi Germany after the war. He only wore boxers, spit on the ground (don’t worry, Esther mopped it up right away), and liked to smoke cigarettes in my room while I wasn’t home…there is no other reason my panty drawer would smell like lucky strikes! He called me Mary and my (girl) friend Gary. The first thing he said to me was “How are you going to shoot that monkey Obama while living in Brazil?”

Esther and her husband did not approve of my boyfriend. So Esther set me up on a blind date…without telling me. She woke me up at 6am, brought me to someone’s house, rung the doorbell, mumbled something, and left. I expected some nice old lady to invite me in for coffee and pão de queijo, but what I got was a shirtless 40 year old man with a scorpion tattoo on his breast...yes, breast. When he went to his room to put a shirt on I made a run for it. Fifteen flights of stairs. I packed up and left her house the next day.
In retrospect, I think my banana bag was the perfect going away gift. Like a classier version of a flaming bag of shit on the front porch.
It you can believe it, home stay #2 was even worse. Stay tuned for "Mirtes - the homophobic hoarder".
Posted by Nancy at 10:52 AM