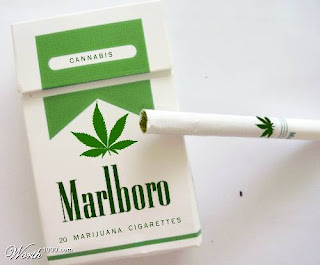 I was born in the small hippie town of Ojai - pronounced "O-Hi" - but more commonly referred to as "So-High". Get it? Get the weed joke? Yeah. Then I moved to the slightly bigger hippie town of Santa Cruz. Up until about a year ago, the only jewelry I owned was hemp and my laundry room was themed Bob Marley.
Living in California, you kind of forget that weed/pot/marijuana/reefer/whatever you wanna call it, is actually illegal. Then to top it off, living in a city where weed is declared lowest priority by the police (meaning, J-walking is more illegal than smoking pot), Prop. 19 doesn't seem like too far of a stretch.
Needless to say, I'm a little shocked it didn't pass. For those of you who don't know, Prop 19 was a proposal that was voted on in November's election that would allow adults (21+) to grow and consume marijuana legally (up to an ounce).
The upside: The government could tax weed, bringing in tons of much needed money for education, health care, and what not. In addition, our prisons would not be full of young adults who were arrested for non-violent drug related crimes involving marijuana.
The downside: long lines at cold stone, lice outbreaks, statewide birkenstock shortage. In other words: POT HEADS EVERYWHERE BAHHHHHHHHHHHHH!
Either way, with Prop. 19 or without, Californians are going to continue to "burn one down", it's just a matter of whether or not the goverment wants to profit from it.
*Disclaimer: I realize that the pot situation in California is wildly different from Rio. No comparison.
Posted by Nancy at 10:25 AM