Mirtes - The Homophobic Hoarder - An Introduction It's been a long time coming, but the thought of even trying to summarize Mirtes in a short blog post is extremely daunting, but here goes.
I left Esther the Nazi Pimp's House with enthusiasm and excitment because 'Gary' and I had just met a lovely Brazilian girl who just happened to have an open room in a beautiful apartment in Leblon and she wanted to rent it to us, for $400 reais a month! Only $400 reais a month and no Nazi slurs, smoke-scented panties, or man boobs!!!
Homeless for the weekend, Gary and I decided to head to Ilha Grande to pass the time before we could move into our new apartment. The weekend was amazing and we took some gorgeous photos. 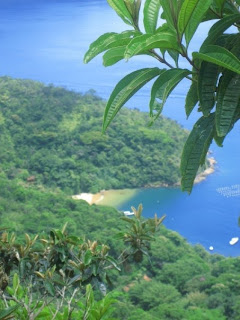 Upon returning we got our first lesson in Brazilian's flakyness cultural understanding of casual commitments. Meaning, the Brazilian girl ditched us and I was left homeless. Literally, bags in the taxi and nowhere to go.
That's when Mirtes (Meer-chez) flew in and saved the day. The caring and selfless evangelical saint that she was, saw my desperity, and offered me a bedroom for the discounted price of $2,000 reais. I repeat, what a Saint!
Let's talk about the bedroom. The term "quarto" was really quite a stretch as I would have chosen "veranda" or "outdoor mosquito breeding ground with a crankable curtain-wall". She also took some liberty with the term "bathroom with hot shower", because all I saw was a hose sitting in the sun...


She assured us that rain wouldn't enter the room, but upon arriving home the next day to all of our precious belongings strewn about the house and a million fans on, it was clear that the veranda had flooded. My computer would have died had I not already killed it with a bottle of nail polish remover at the Nazi's house.


Mirtes had a few basic rules: no smoking, no drinking, no foul-mouths, no boys, no girls, no music, no unpure thoughts, NO GAYS! Did I mention we lived on Farme? We just nodded our heads and swore up and down that we were good evangelical girls. Well, needless to say it only took a few days for us to stumble in drunk at 3am in neon wigs and body paint for Mirtes to get suspicious...and that's when the hoarding began.
This post is already getting long and my brain is overflowing with ridiculous Mirtes stories, so I will save them for another post (or 10), such as:
-Mirtes sings about Cocaine
-Mirtes' panties in my bed
-Mirtes builds a cubicle in the living room
-Mirtes' Bible Bootcamp
-Mirtes' son's sex CD
and my personal favorite
-Mirtes gives the pedophile a key to our bedroom.
Posted by Nancy at 10:09 AM