God, is that you? 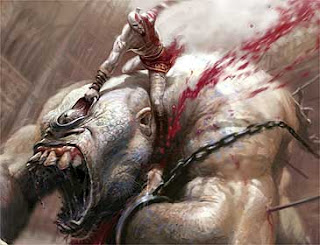 I have never been religious, and probably never will be. The extent of my religious endeavours is limited to sunday school as a child (when my brother and I sat on the church balcony and counted how many old ladies with poofy white hair we could see), and reading The Bible For Dummies in highschool to avoid reading the real thing.
But something happened this weekend that has made me start to wonder...
Late late late Saturday night, a friend of my Namo's invited us out to celebrate his birthday. I was tired (as always) after writing about a million pages for work, but it was important to my Namo so I sucked it up. It was one of those crazy electronic parties, in Barra...the kind were you have to dance your life away until sunrise...not for the mildly enthused.
That's when God stepped in.
Before we left, my Namo had to stop to withdraw some money, but no matter how hard he tried, every attempt failed.
1) While trying to withdraw money from the first bank, all of the alarms went off and the machines shut down.....weird....
2) The 24 hour ATM ran out of money right after the person before us finished....double weird...
3) Card #1 of my Namo's had stopped working that day and he had no idea why.
4) Namo had saved card #2's pin number in his phone. His phone stopped working that night so he removed the sim card. Once he put it back in, the pin number was erased.
5) After 1 hour (literally) of walking around Zona Sul, we didn't find a single bank that was open or working for him to withdraw money.

He gave up and we went home to eat chocolate and watch a movie. I'd be lying if I didn't say it was a slight relief, but I did feel bad for my discouraged Namo. When things like this happen, it makes me wonder if there was some reason we were not supposed to go that night.

P.S. The picture. How come when I type "God" into the google search bar, this is the first picture that comes up? I went through 3 pages without finding anything "God-like". Apparently "God of War" trumps the man upstairs.