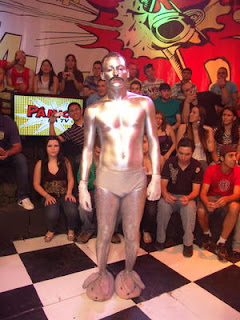 If you have never watched the program Pânico on television here, it is definitely a must see. It has all the ridiculousness of a Latin American day time program (ie. girls dancing around in bathing suits) and a bunch of hilarious skits. My favorite is “The Imposter”. They have a cast member who manages to sneak his way into high profile events without tickets or passes of any kind. Of the ones I have seen: the final world cup game in south Africa (he actually got close enough to the players to talk to them…no ticket), Paul McCartney concert, and the house where the Twilight Saga movie was being filmed (he got Kristen Stuart in her Calcinhas, and left garlic on Robert Pattinson’s bed).

This show is very close to my heart, because I was on it. Well, I cant be sure I was on it, but I was for sure filmed on Copacabana beach. It was my second week or so in Rio, my understanding of Portuguese was limited and I was very vulnerable. My friends and I stumbled out of a night club at 5am, ate some açai, changed into our bathing suits and went to the beach.

It all happened so quickly. One minute I was lying on the beach enjoying the sun with my friends, the next minute everyone was gone and I had cameras in my face and two men wearing T-shirts with women’s bodies on them and fake teeth were asking me questions. It went a little something like this:

Probably not my best interview. Now is when I should try to justify the dirty feet by saying I had spent all night in a grimy night club, but I shouldn't lie, I've been given the Native American name "Little Black Foot" because my feet are always dirty.

If you understand Portuguese, or want to test your skills, check out this interview. It is very long, but really really funny! The guy being interviewed is (a cutie!) the guy that plays Freddy Mercury Prateado on Pânico (Eduardo Sterblitch), and he gets Jô Soares a little drunky!