Is That Really Necessary? 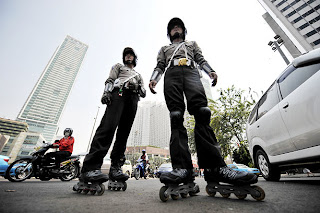 When it comes to job creation, you have really got to give it up to Brazil. I mean, people get seriously creative down there (how depressing, I have to say "there" now...). There are the people who weave through traffic like its nothing, juggling or selling sodas to cars stuck in traffic.
Then there was the entrepreneur who capitalized on the dreadful bathroom situation during Carnival. Carnival is generally a time when people lower their standards in terms of appropriate/discrete public urination. Which is scary considering I've seen men sit on a curb, whip it out, and discretely (read: incredibly obviously) pee in the gutter. And this is on a normal day. Imagine how graphic it gets when the streets are filled with hoards of bebados!
Anyways, this genius Brazilian man decided to construct a cardboard stall around an open manhole. He then charged ladies 1 real to enter the makeshift stall to squat over a manhole to xixi. If that sounds discus ting to you, you have probably never celebrated Carnival...it gets MUCH worse, like digging a tiny hole in the sand and pretending like you are sitting back and enjoying the ocean view
But, when it comes to creative jobs, the roller-guri takes the cake! At the Zona Norte shopping mall, it is difficult enough trying to navigate the hoards of shoppers (and 2 hour old babies...its like they are popping them out in the parking lot before getting their holiday shopping done). Well, someone at the mall finally had enough and decided that the only obvious way to make life easier on the mall janitors was to give them roller blades.
So, a note to all Zona Norte Shoppers: keep your head up, because the speed skater/janitor may be protected from head to toe (we are talkin helmet, knee pads, wrist guards, elbow pads, gloves...) but they have no concern for your safety when trash collecting at 90mph. It's a serious job folks!
Posted by Nancy at 9:20 AM