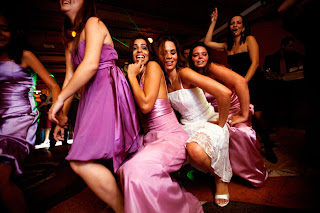 I have now been to three weddings in Brazil, and it seems each one gets more and more bizarre. The first wedding I went to was at a beautiful church at the top of a hill in Petropolis. The outside of the church was charming and covered in ivy. The inside was a little creepy. Perhaps it is because Im not religious, but there were too many crucified and bloody jesuses in that church for a wedding.

It was a day time wedding, so my Namo informed me that guests would be dressed “casual”. I heard “casual” and thought sundress. Well, I forgot that my Californian casual is a casual like no other, and I should never ever make the mistake that Brazilian casual means anything less than a ball gown.

When I first saw the guests waiting outside, I thought “wow, she has a lot of bridesmaids”. Nope. Just guests. Each one more elaborate than the next. So I was horribly underdressed, but luckily (for me) my Namo got the stomach flu and we left soon after the ceremony (but not without getting to eat delicious cajuzinhos and mousse de maracuja).

Naturally, I was terrified when my Namo told me his cousin was getting married at a super ritzy venue in Barra “Garden Party”. A night wedding! GASP! The scary thing is that night weddings are even more elaborate than day weddings, as if that is even possible. And to top it off, they are Italian, and we all know what that means.

I asked my boyfriend about the whole idea of “not outshining the bride”…does not exist here. You should have seen the number of guests in white wanna-be wedding dresses. I tried my best to dress up for this wedding, but it just didn’t happen. I refuse refuse refuse to buy one of those gross shiney fabric bridesmaid/junior prom dresses for R$300."

The third wedding was my favorite of the three. I actually got some photos of this one. 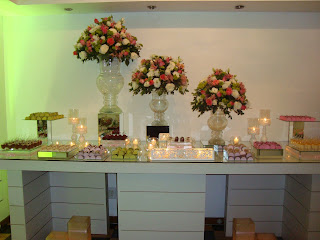 It was at night, in a venue across from Norte Shopping. The food was soooo yummy. Sweet cherry tomatoes filled with gorgonzola, and the mini pastels that everybody loves. The best had to be when the waiter offered me a dried apricot with brie cheese "Damasco". Something about the look on the waiter's face made me realize he was offering something a little naughtier than a dried fruit...apparently "Damasco" (apricot) sounds a lot like "Dá mais cú" (dirty waiter).

The ceremony at this wedding was actually very odd. It was right in the middle of the party, during the party. So about an hour after we arrived, mingled with guests, drank and ate snacks, the procession began. It took about 30 minutes for all of the family members to prance around and do their walk down the isle. Finally the bride arrived, and nobody paid any attention to the ceremony. It was the oddest thing. Everyone just continued on with their conversations, eating and drinking while the priest mumbled into the microphone. I've never seen anything like it. I don't think this is very typical of Brazilian weddings though, because my Namo was pretty shocked as well. The best part of the night had to be the Lady Gaga drag queen. 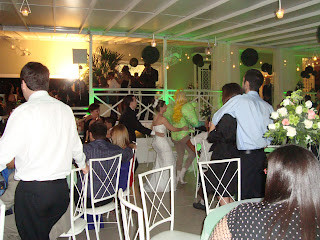 1) No garter removal! I have never seen this at a Brazilian wedding and my Namo tells me it would be way too inappropriate. Instead, the bride throws the bouquet and the groomsmen go around cutting up the groom's tie and selling the pieces to guests. The peer pressure to buy a piece of the tie is enormous and you get some sort of sticker or keep sake when you do.

3) The ceremony. At all 3 weddings I went to (okay, I missed the ceremony at wedding #2), the married couples signed their marriage papers during the ceremony. I feel like Brazilian wedding ceremonies are a bit more stop and go in this regard. At the first wedding I went to, the camera man stopped the bride as she walked down the isle, to bring out his lighting experts and take mock-candid photos of her pretending to walk.

Have you guys been to any Brazilian weddings? Some of you were probably part of them...did you adopt the Brazilian traditions and mix them in with your own?
Posted by Nancy at 9:54 AM