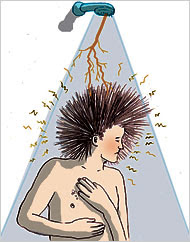 Is it just me, or should the term "electric shower" just not exist? I mean, I don't know how many times my parents told me when I was a kid to stear clear of radios, hairdryers, anything with a wire while I was in the bath.
So you can imagine my surprise when I realized that my showerhead in Rio has two wires coming out of the top that lead to the electrical box. I decided that maybe things in Brazil were different and for some reason and electricity and water just magically get along here....NOPE!
I think I almost died yesterday. And no, i'm not exaggerating like I was with the mini-bombing. This one is serious. I was taking a shower, and just as I turned off the water and started to step out I heard a CRACK and saw a huge flash of light, followed by a bunch of smoke and burning rubber. I threw a towel on and ran to the other side of my apartment (yeah, a whole five feet away).
I called my Namo about it, super shooken up and we called an electrician this morning. After closer inspection, the entire wire was burnt, including the tube connecting to the shower head and the wall where the two connect! If the water had still been on, I would have fried!
The electrician came today and I got a stern speech about how I can't overindulge in 10 minute showers. Wait. How does one overindulge in a 10 minute shower. If by overindulge you mean putting shampoo in my hair and shaving my left armpit, okay....but how do you expect a girl to wash and condition her hair and shave everything that's got to be shaved in under 8 minutes. (yes, he told me I have 8 minutes tops unless I want to get fried like an egg).
Maybe it's time I invest in a gas shower. Personally I'd rather get blown up in a gas leak than fried in a shower.
Posted by Nancy at 12:22 PM