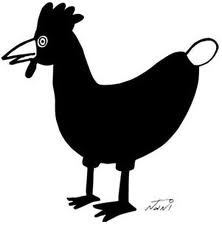 I love idioms! I think nothing says more about a culture than the Idioms people use. I was once called out in front of my entire class at PUC (a class called “Estudos da Cultura de Português como segunda língua) for an email that I wrote my professor where I translated an idiom. It was an idiom so ingrained in American culture and our conception of time, that I didn’t even realize it was an idiom.

Thank you for your time.

To my teacher, it was absolutely absurd that I would thank her for something like “time”. To me, it was polite. She went on a huge rant about how Americans think time is something to be owned, have, give, waste, use wisely, borrow, need…etc.

Once I started realizing that idioms are so demonstrative of people’s cultures, I reaaaaallly started to understand why I love Brazil. Português has idioms for many of the same concepts as English, but they manage to put a naughty spin on it:

Rough Translation: Don’t count on an egg that's still in the chicken’s asshole.

He was left with nothing but the shirt on his back = ele foi deixado com uma mão na frente e outra atrás.

Rough Translation: He was left with one hand over his man parts, the other over his bum-bum = NAKED!

I have no idea what the equivalent in English would be. Basically, someone who can't make a decision. He doesn't use the resources he has but doesn't free them up for others to use. Do we have an idiom for this?

Quem tem cú, tem medo. = He who has an asshole, has fear.

Again, I don't know if we have an idiom for this one. I'm assuming this means something like "everybody is afraid at one time or another"...

Anyways, Brazilians do seem to have an obsession with all things cú related...and it has quickly become my favorite naughty word in Portuguese!