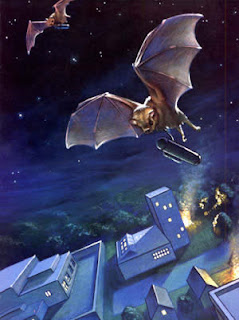 The title is a little overdramatic. It probably technically couldn't even be called a bombing because it wasn't a bomb, it was a firework, and nothing got blown up, it was just loud. Whatever, gunshots, fireworks, bombs all sound the same and are scary as hell.

Me and my Namo (Namo = Namorado...yeah, I made that one up myself) went to our favorite little neighborhood chopp place this past weekend. It apparently was voted the best chopp in Copa the past 8 years in a row. I don't really get how one chopp can be better than another chopp...i was told it had something to do with the amount of foam on top.

We were waiting for a table for so long that we decided to bail and cross the street to a different place. When attempting to leave, the waiter came over and assured us a table would be cleared soon, so we decided to wait. Just then, some babaca decided to chuck a bomb thingy out his window in the neighboring apartment, at the crowd up people sitting outside drinking. Everyone at the boteco screamed and jumped up. It was terrifying!!!

The scariest part is not only did he almost hit a dog, but it was right where my Namo and I had been standing a minute or too before. This isn't the first time this has happened. We once thought there was a fire in our apartment building (which is a frightening thing living on the 12th floor) because some crazy-pants tossed a firework into the common area below the building and filled the space with thick smoke.

What was really special about this event though, and something i have actually never really seen happen here, was everybody's response. A passerby had seen the guy who threw it (on the 2nd floor) and pointed him out, people banned together and started calling the police...now whether or not the police actually showed up is another story, but it was nice to see people react to a situation like this. I'm sick of watching people cut in line at the grocery store, blow snot rockets on the ground in front of where you're walking, and be outright rude and obnoxious without getting a good Carioca Wording!

Quick side-note about the picture: Durring WWII Roosevelt approved a military plan to attach small bombs to bats. The bats would be dropped from an airplane over Japan and would fly to various buildings to roost. At any given time, someone would push a detonator switch and all the suicide bats would explode, causing mass fires across the country. After spending a measly 2 million (no biggie) developing the plan and training these poor captured bats...they decided to just go ahead with the atomic bomb.
Posted by Nancy at 10:14 AM