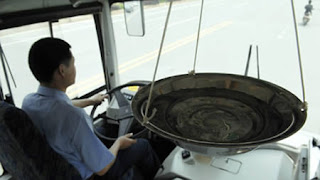 The worst has to be the buses. And the later you get on a bus, the crazier the driving is. It's a safe bet that if you board a bus at 2am in Zona Norte, you can make it to Copacabana by 2:30am at the latest...that is, if you don't fly off a cliff on the way. I get that the driving style is different here, kind of like a video game. That being said, I don't want to die on a bus full of strangers.

So what can be done? Well, in China, some bus drivers have to drive with a bowl of water suspended from the top of the bus. If they drive Carioca style, that water is going to be all over the ground at the end of their shift and someone is going to be unemployed. To top it off they are filmed, so no cheating allowed!

I can see how Rio bus driving can be a positive thing, like when I'm really late and need to be somewhere...but let's face it, even when you're late in Rio, you're on time.